Artificial Turf And The Fear Of Cancer In Soccer Goalies 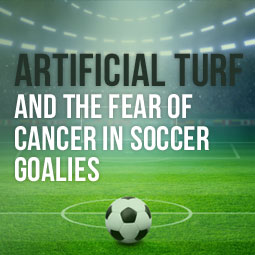 For decades, artificial turf has been used to re-surface playing fields. With little to no maintenance, it saves field and team owners thousands of dollar a day in upkeep. It doesn't show wear and tear and it provides a suitable surface for most types of play. Recently, a large number of soccer players, mostly goalies have been diagnosed with different types of cancer, predominantly of the lung and skin. Many people are suggesting that the increase in cancer cases are directly linked to the time they spent playing on artificial turf.

Part of the problem with this scenario is that for all of the suggestions and supposed links to the cancer cases and artificial turf, the numbers don't back up the claims. Thousands of players participate in athletic events on artificial turf playing fields. Even though there may be flaws in some of the studies that have been performed on athletes who play on artificial turf, the majority of information collected over the past sixty years concludes that it is safe to play on. Studies currently being performed continue to repeat what was previously known, that artificial grass does not offer a significant health risk, even for individuals who play or have contact with it several times a day.

The main links between artificial turf and cancer comes from the infill and possible substances used in the construction of the fabric and infill. Artificial turf is made with many substances that are chemically based. From polyethylene fibers to the crumb rubber infill, people have always worried about the side effects of playing on artificial grass. The fact is the majority of components used in the construction of artificial turf have been tested repeatedly for a variety of health risks ranging from possible cancer threats to the increased risk of infection. The tests have repeated cleared synthetic grass from many of the accusations of being potentially harmful.

The two biggest components or “threats” when it comes to artificial turf and health concerns are crumb rubber that is used as an infill and lead paint that was used in the construction of older fields as a paint to coat the blades of grass and mesh underlay. While the threat of lead poisoning as never been considered a real problem, places that have older versions of artificial turf installed are looking into replacing it and upgrading to newer, longer lasting forms of synthetic grass.


The biggest threat, according to many of artificial turf's detractors is crumb rubber infill. They believe that when rubber tires go through the shredding process that converts them into the smaller crumbs used to create the infill, they begin to leach out toxic chemicals. When tires are manufactured, the rubber is treated with many different chemicals. Over the years of their use, the tires continue to be exposed to exhaust and other airborne contaminants. It is suggested that the crumbling process releases all of these toxins and when athletes play on fields with crumb rubber infill, they are exposed to high levels of contaminants that increase their risk of various types of cancer and other potential health problems.


When all of these claims began to surface in the 60's and 70's, the studies that were performed were not as precise and exacting in their details and specifications as they are today. Even with the latest technological advances, the studies still do not support the claims that the artificial turf is the definitive cause of the health problems and cancer scares many of the goalies and other soccer players are claiming. Studies will continue, but the general consensus is that artificial turf is relatively safe for long periods of play.