Why Astro Turf Filed for Bankruptcy - What's Next?

Posted by Troy Scott on 17 August 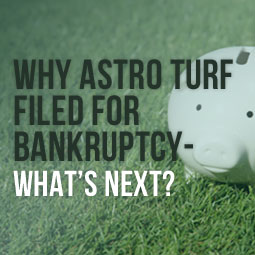 Artificial turf has been around for over six decades. It has become a mainstay for recreational parks, playgrounds, school athletic fields, commercial real estate and residential lawns. Its ability to save millions of gallons of water each year in drought stricken areas of the country has made it one of the most lucrative products in this century. So why is the most famous brand of all filing Chapter 11 bankruptcy?

The History of Astro Turf

Originally known as Chemgrass, artificial turf was invented in 1964 for the purpose of converting many natural grass playing fields to a similar surface that required less maintenance and was easier to care for. Astro Turf got its name because of where it was first used. The Houston Astrodome was the first professional athletic arena to install the new turf. Since that time, artificial turf has been known as “Astro Turf”. No matter what brand a person choose, they often refer to it by the famous nickname.

Recently, the artificial turf company has hit a financial rough patch and have chosen to file Chapter 11 Bankruptcy. A patent court in Georgia recently awarded Field Turf $30 million in a lawsuit against Astro Turf for willfully infringing on a patent they owned. Astro Turf allegedly infringed on the patent by using a specialized system of attaching artificial blades of grass to the intricate mess, fabric backing. The award consisted of $20.3 million in lost earnings and over $9.7 million in royalties and other losses. As rivals in the industry, both Astro Turf and Field Turf are well known for having high quality products and producing large revenues.

Astro Turf's loss in court has prompted the corporate headquarters to start proceedings in Chapter 11 bankruptcy court. The company concedes that it cannot cover the total amount awarded to Field Turf and there is no way to feasibly get a bond for that amount. While the bankruptcy has already been put in motion, the company has accepted an offer from one of its global competitors located in Germany.

Sports Group Deutschland has offered to buy the company for slightly over $92 million. Field Turf is attempting to block the sale stating that it would be unfair for its investors and would result in a substantial loss for their company.

As of now, both companies are trying to move forward, Astro Turf with the bankruptcy and sale of the business and Field Turf with resuming its fight to maintain the amount it was awarded. It is up to the court how the end will play out. If the court rules for Astro Turf, much of the judgment may be set aside, while if Field Turf wins, they could walk away with a large percentage of ownership in the Astro Turf company. Each company has the legal right to pursue their own option, but the court will determine whether or not Field Turf has the right to control Astro Turf's financial futuer and protects its financial interest.


The fact is, artificial turf is here to stay. It has become one of the biggest businesses in the world for many reasons. Its environmental impact alone makes it an excellent investment. Its continued use in athletic arenas and public playgrounds has also secured its popularity. Now with it being used to re-surface residential lawns, Astro Turf and the many other brands of artificial turf around the world have become a lucrative business. In today's world, business is just like an athletic event. Everyone needs to play by the rules or they will have to spend time in the penalty box.