Artificial Turf is All Over Sports! 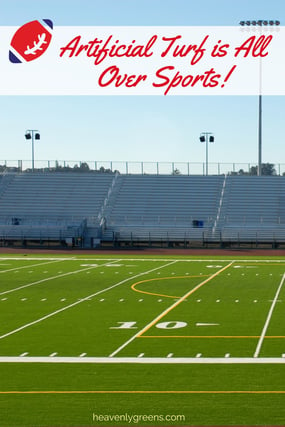 Are you ready for some football? I know we are! With a month to go until any real football, we wanted to show you a little construction project that Notre Dame did last year to their stadium. After years and years of natural grass they have made the change to Artificial Turf! Scroll down to view the time lapse video.

But why you ask?

Athletic Director Jack Swarbrick was quoted below for the reasons they made the change from natural grass to artificial turf.

“We had a strong predisposition to stay with a natural grass field,” says Notre Dame vice president and director of athletics Jack Swarbrick. “However, the reality is that in two of the last three seasons since we moved Commencement to the Stadium we have been unable to produce an acceptable playing surface. That, combined with the likely impacts of future construction at the Stadium, led me to conclude that we would continue to struggle to maintain a grass field that meets the expectations of our student-athletes and fans as it relates to appearance, performance and safety. “Synthetic turf will assist our game preparation because our team will be able to play and practice on the same surface. We will also be able to utilize the Notre Dame Stadium field for practices on home football Fridays and other occasions, whereas that is currently unrealistic. Additionally, this change allows us to eliminate the risk to players posed by the asphalt perimeter that has to be maintained around our current field.” - Jack Swarbrick

Below is the time lapse video of the installation.

Legend has it that Notre Dame was known for using their natural grass to their advantage by letting it grow higher than usual to slow down opponents. Most notably they were accused in two games:

1) In 1976, when they played Pittsburgh who was led by Tony Dorsett (ultimately the Heisman Trophy winner of 1976). The previous year Dorsett had gained over 300 yards against ND and they were accused of using this tactic to slow him down. Ultimately he ended up with 180 yards and was quoted years later saying in the Pittsburgh Tribune-Review, “You could drop a golf ball in the grass and couldn’t see it. It was that high. The field was wet, and it hadn’t rained.”

2) In 2005, many USC players and coaches believed they received the same treatment in order to slow down Reggie Bush. Or as some would like to call him Reggie Push for the infamous push he gave Matt Leinart to win the game at the end of regulation instead of opting for a tie for OT.

Recently two more colleges have decided to install artificial turf on their field this year. UTEP will remove their grass field and replace it with artificial turf in order to save money.  Chris Park, senior associate athletic director at UTEP, was quoted saying "We've struggled. Just so much money goes into consultants and having to re-sod. It was just a smart financial move for the university to put in the artificial (football practice) field, that's going to mirror the Sun Bowl field. So the team will practice on the same field they play on Saturday's."

And now Coastal Carolina has jumped on the bandwagon and plans to install artificial turf. But it won't be the normal grass colored field. Coastal Carolina plans to create a teal field. That's right. I said teal. Take a look at a field rendering released on their Twitter account. 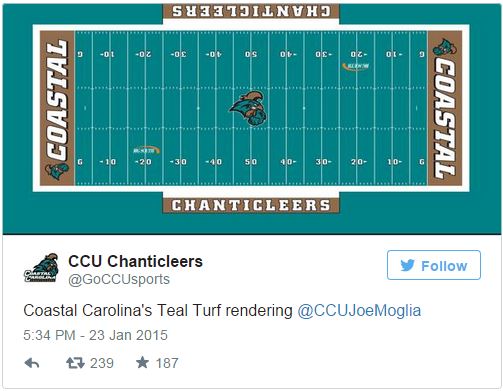 First off we wanted to say congrats to the USWNT for winning the World Cup against Japan. You earned it.

Artificial Turf Can Be Found On Sports Fields Everywhere

Currently artificial turf is being used on 22 of 32 NFL team fields and hundreds of universities and high schools across the United States. And this is not a trend we see declining anytime soon. Artificial turf just makes sense when it comes to money and weather conditions.