What Games Are Safe to Play On Artificial Grass? 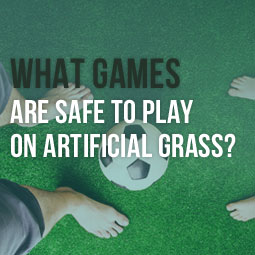 Artificial grass is ideal for playing almost any type of sport. That was how it gained its notoriety in the first place. The owners of the Houston AstroDome decided to use it to create an indoor playing field. As the first domed stadium, it was used for several different sports, including football and baseball. Over the years, the teams and sporting events may have changed, but the facility still uses artificial turf as its playing surface of choice.

Many restaurants and recreational areas that offer bocce ball courts and other outdoor sporting areas use artificial turf for their playing surface. There is less upkeep, no worrying about treating with fertilizer or herbicides and no down time while the area is cleaned or mowed. The right type of artificial grass makes playing bocce ball fun and easy. The right turf allows for the right amount of ball speed and will keep them rolling naturally.

Artificial grass was first used as the playing surface for one of the National Football League's most well known teams. Although the thickness of the turf became an issue when certain types of cleats or athletic shoes were worn, over time, most of those issues were eliminated. The same is true for soccer. Now, artificial turf is used all over the world, especially in areas where playing outside is less than favorable. Both football and soccer leagues have installed artificial grass in many venues with great success and a minimal amount of injuries being attributed to the new surface. Artificial grass allows for maximum ball play while protecting players from injury during tackles and various levels of contact.

When the AstroDome first installed artificial grass, it gave the owners the ability to test the turf for two specific sports, both football and baseball. Players from both sports were allowed the opportunity to give their input as to how the turf could be better for each of their respective sports. With advancements in technology, the artificial grass that is now used on most playing fields is designed to offer the best maneuverability with the maximum safety.

Golf has turned out to be the ideal sport for artificial turf. While it is great for baseball, soccer and football, artificial turf can provide golfers with the most life like playing surface that truly represents the putting greens they play on during a competition. Homeowners who want to practice their putting in their privacy of their own backyard can install a putting green that has been designed to their unique specifications. They include special features and make it almost any size or shape.

Because of how artificial grass is constructed, the area where it has been installed has been leveled and an infill included to help stabilize the blades. For children who are involved in tumbling or gymnastics, the texture and cushion of the artificial turf makes it an ideal surface to perform routines. Hands will not slip and feet won't get stuck or in the dirt. The right type of turf can provide an even, richly textured surface that feels and looks as natural as possible.

Artificial turf has been a mainstay in athletics for over fifty years. Homeowners who have the opportunity to use it as a part of the back yard landscaping are looking for ways to utilize it to its fullest advantage. If they want to maintain a large portion of their lawn as natural grass, they can use the artificial turf to create unique sporting and recreational areas that require little to no maintenance. Many, however, are choosing to replace all of their natural grass with artificial turf in an attempt to save both time and money in the long run.